TL; DR - Everyones hates CAPTCHAs! So do I. But I wrote a new one anyway :p. It's a visual CAPTCHA scheme that can be solved with 2-4 mouse clicks and is named pixelcaptcha.

Here are the links to a borderline ugly demo web application (I like to think its borderline), a detailed white paper (you may like it) and its Java source code (with gory Maths - you've been warned).

Long Story
This post is to talk about a fancy kid in the CAPTCHA town that now happens to have a demo web app for you to play with. It was first demo'ed at BlackHat USA Arsenal. It's source code has been available for a while but I finally got around to creating a demo web app and wanted to share it via this blog so that the security and developer community can play around and share feedback.


The Demo Web Application
To solve a CAPTCHA, you need to find the black characters similar to be blue ones and hit submit. If you accidentally select a wrong character, you can use the 'Clear Selection' button to clear your selection. I should point out that a CAPTCHAs are good only for one use. If you submit wrong solution once, attempts to solve the same CAPTCHA again will result in error message.

The demo web application has several components to it. It allows you to generate and solve new CAPTCHAs and try out different CAPTCHA configurations. At the backend, the demo application uses the open source CAPTCHA library.

The image below shows an example solved CAPTCHA with default configuration. 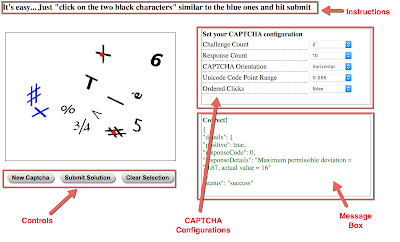 The Three Control Buttons
You will see three buttons under the CAPTCHA image which let you perform the actions as described below:


Message Box
The text in the bottom right box displays information about your most recent actions. The text color legend and some example messages are provided below. 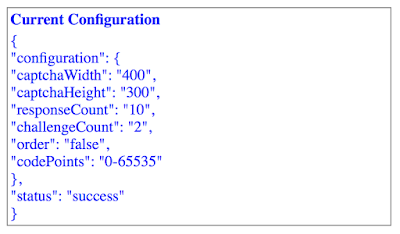 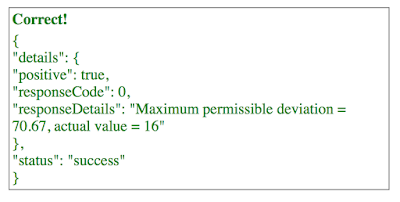 Different CAPTCHA Configurations
When you select a new value from any dropdown, a new CAPTCHA configuration will be set on the server and the on-screen CAPTCHA will be refreshed with the new configuration. The instructions at the top of the page are also updated based on the challenge character count. I'll briefly explain different configuration options that you can try out on the demo application.

A Few Example CAPTCHAs and The Corresponding Configuration

I'll be looking forward for your feedback. Please feel free to leave feedback here, log bugs on GitHub or directly reach out to me. Thank you!

Posted by Gursev Singh Kalra at 12:01 AM No comments:

Last year, ysoserial was released by frohoff and gebl. It is a fantastic piece of work. The tool provides options to generate several different types of serialized objects, which when deserialized, can result in arbitrary code execution if the right classes are present in the classpath. In this blog post, I will discuss the CommonsCollections1 exploit, and its working, available in the ysoserial toolkit.

All code snippets used in this post are sourced from ysoserial

An Overview
The CommonsCollections1 exploit builds a custom AnnotationInvocationHandler object that contains an InvokerTransformer (Apache Commons Collections class) payload, and outputs the serialized object. When the serialized object is deserialized, the code path from AnnotationInvocationHandler's readObject leads to InvokerTransformer's payload, causing code execution.

The image below shows the custom AnnotationInvocationHandler object used for RCE. 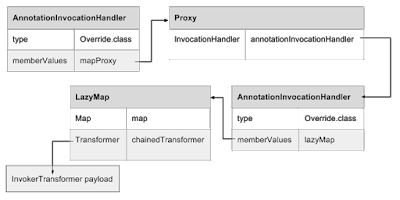 So, as long a Java software stack contains Apache commons Collections library (<= 3.2.1), it will be vulnerable to remote code execution attacks while deserializing untrusted objects.

Image 3: Shows chainedTransfomer invocation when a value is set on the LazyMap


Putting it all together

The code path flow leading to code execution is discussed below and is also summarized in image 4. 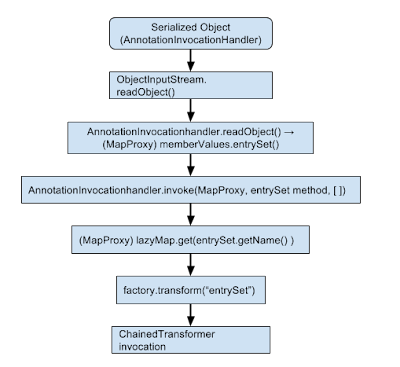 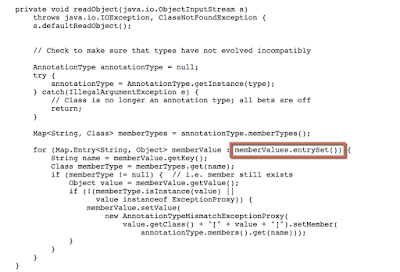 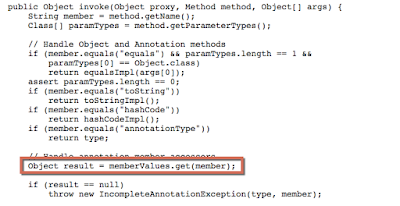 Image 6: Shows AnnotationInvocationHandler's invoke method that was attached to the mapProxy

Image 7: Shows transformer invocation when a key is not present 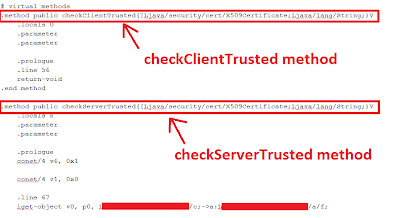 Recompiling and Deploying the Modified Application
Confident that all checkServerTrusted invocations from this point onwards were going to be successful, I recompiled the application with ApkTool, signed it with SignApk and deployed it on the device. The web proxy MiTM worked like a charm and I was able view, modify and fuzz application traffic.
Posted by Gursev Singh Kalra at 9:35 AM 3 comments:

Debugging Out a Client Certificate from an Android Process

I had setup my web proxy to intercept the Android application’s traffic, tested the proxy configuration with HTTPS based Android applications and the traffic interception worked like a charm. However, for the application under test, things were different. Connections to the applications’ server returned HTTP 403 error code because SSL mutual authentication was enforced and I did not have the client certificate. The image below shows the error message. 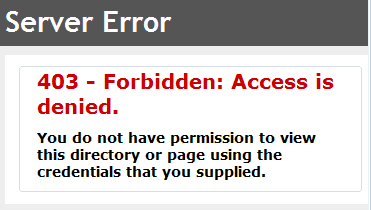 I was in a situation where no meaningful communication could be established with the remote server. The resource files obtained by decompiling the application did not contain containing the client certificate and it was clear that it was stored in the obfuscated code somewhere.
The RSAPrivateCrtKey and two certificates were already extracted from the application’s memory as discussed in the previous blog post. As it turned out, those were not sufficient and I still needed the client certificate and the corresponding password to be able to connect to the server and test the server side code. This blog post will how they were retrieved by debugging the application.
Identifying the Code Using the Client Certificate
The knowledge of how Java clients use SSL certificate to support client authentication proved critical during this assessment and helped me identify the function calls to look for during the debugging process. The typical steps followed to load a client certificate for a HttpsURLConnection are summarized below:
The following image depicts the steps discussed: 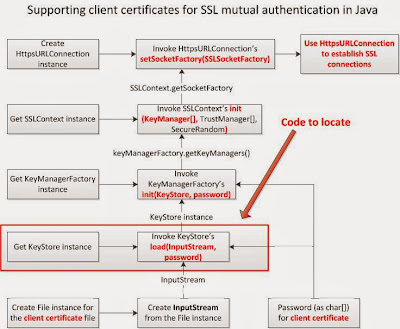 Instantiating a KeyStore and loading an InputStream for a client certificate are central to SSL client authentication support. So I searched the decompiled code for KeyStore class usage, corresponding instance variables and identified classes and methods that were potentially configuring the client side SSL certificate for HttpsURLConnection.
Locating the Debug Points
I continued to eliminate KeyStore usages till I identified the class and method I was interested in. The identified class and method did not refer to any resource files to get the client certificate and its password but relied on couple of function calls to get the byte[] representation for client certificate and String representation for the password before feeding them to the load method of the KeyStore instance. Following the code paths led me to the two magic strings that I was looking for. They appeared to be Base64 encoded values of client certificate and the corresponding password.
Base64 decoding them returned gibberish which could not be put to any practical use as there was more to the encoded values than plain Base64 encoding. Further analysis revealed that they were subjected to standard crypto algorithms, and those algorithms were fed their Initialization Vectors and Encryption Keys from other Java classes. Additionally, the application also used some custom data manipulation tricks to further obfuscate them.
With limited time at hand I decided to briefly shelve the code analysis and move to application debugging to inspect the exact code points of interest for data extraction. To help with the debugging process, I noted down the class name, method name, and instance variable of interest where the potential client certificate and password were fed to the KeyStore instance.
Setting up the Application for Debugging
Reviewing AndroidManifest.xml of the decompiled application indicated that the application was not compiled with the debug flag and hence could not be debugged on a device. So I added the debug flag, recompiled it, signed the application and then installed it on the device. The following steps summarize the process of creating debuggable versions of existing Android applications if you plan to debug the application on an actual device.
The image below shows the debuggable attribute added to the AndroidManifest.xml file of the target application.

If you are using an emulator, you can extract the application from the device, install it on the emulator and attach a debugger without decompiling or adding the debuggable attribute to the AndroidManifest.xml file.
Let us now look at some of the important pieces of the debugging setup that was used.
Java Debug Wire Protocol (JDWP)
The Java Debug Wire Protocol is a protocol used for communication between a JDWP compliant debugger and the Java Virtual machine. The Dalvik Virtual Machine that is responsible for running the applications on Android devices supports JDWP as it debugging protocol. Each application that runs on a Dalvik VM exposes a unique port to which JDWP compliant debuggers can attach and debug the application.
Once the application was installed on the device in debug mode, the next step was to attach a JDWP compliant debugger, such as jdb, and get going.
jdb – The Java Debugger
jdb is a JDWP compatible command-line debugger that ships with Java JDK and I use jdb for its command line goodness. The typical process of attaching jdb to an Android application is summarized below:
The following resources can get you started on jdb debugging with Android. 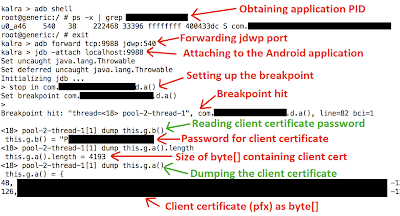 After obtaining the byte[] dump of the client certificate, I created the pfx file with following Java code and then imported it to my browser store and also inside the web proxy. 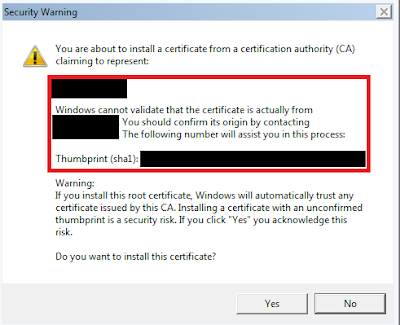 The imported client certificate then allowed me to successfully engage and assess the server portion of the application. In addition to the client certificate, combining the static and dynamic analysis techniques also allowed me to retrieve other sensitive information like Initialization Vectors, Encryption Keys etc… from the application.
Posted by Gursev Singh Kalra at 7:51 AM 8 comments: